The Best Looper Pedal for a Beginner or Professional

Acoustic guitar megastar Ed Sheeran monumentally managed to headline the Glastonbury in 2017 with nothing more than a Little Martin guitar and a looper under his feet. This solo artist impressively conjures the sound of a whole ensemble on stage, and you'd understandably wonder how he does it. Other than pre-recorded tracks, artists can have a live performance using the best looper pedal that lets the musician create layers of sound.

A looper pedal is an electronic gadget that instantly creates recordings of the musical performance and then plays those same recordings back in real-time, allowing the musician to overdub the recording to create an extensive polyphonic soundscape that is based on their performance.

Before the dawn of loop pedals, artists had to work with large recording consoles to capture the performances and play them back with decent sound quality. But today's compact looper pedals which are no bigger than guitar effects pedals, provide a lot of recording time with near-unlimited overdubs.

Loop pedals are conveniently ideal for solo artists who want to add an extra element to their performance. With all this, choosing the best looper pedal might sound like a daunting task with all the options out there. However, it is best that you note that some are best suited for acoustic and electric guitar musicians that are new to the looping idea, while others are designed with the professionals in mind. 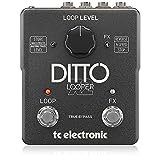 Essentially it comes with only two controls - the Start and Stop - making it hard to mess up with live loops, well, unless your timing is a little off. However, with practice, the TC Electronic Ditto is as powerful as they come. The lack of quantisation is a definite bonus, especially if the musician uses polyrhythms or playing in different time signatures.

This TC Electronic Ditto Looper is easy to use and popularly known as an entry-level looper pedal. It has a single loop volume control, one to play, one to record, and a dedicated Stop button.

It also has two effect modes, which give you the options of a half-time playback and reverse playback of the loops, a stereo I/O, and the capacity to save and load loops via USB. Looping one artist is one thing; however, keeping up with the band's loops is another, which is where TC Electronic Ditto X2 cleverly takes the crown by keeping up with the whole band's rhythm.

Without compromising the sound quality, the Ditto looper 'listens' to the rhythm elements of the band and adjusts the loop accordingly using its in-built microphones.

It also comes with a practice mode that allows you to record the loop slowly then later speed it up, individual stop and loop footswitches, and rec/dub/play and rec/play/dub functions. Overall it is simple but highly functional and effective.

If you don't have as much space on your pedalboard and can work with a looper pedal that doesn't have a dedicated Stop switch, then the TC Electronic Ditto+ is a worthy option.

TC Electronic Ditto+ offers a 60 minutes loop time, the storage ability of close to 99 loops, a USB port to import/export loops, and a high-resolution colour display. However, everything considered, the Ditto+ may be the same size as your pedalboard and is actually one of the smallest looper pedals you’ll find.

This industry-standard loop station is regarded as Boss’s most user-friendly loop station in its line. It comes with a big clock face dial to help track how far in the current loop is, with a single-level control.

Previous Boss versions of the smallest looper have been a little difficult to use in live performances. Even with RC-1's single-button operation, the glowing ring denotes the playback position and loop length changes. This looper is intuitively easy to use with a clear display to show where you are in the loop or capture. This means fewer mistakes.

Like the Boss RC-30, the RC-1 is 16bit, which ultimately shouldn't be an issue, especially for live use. It doesn't come with a save and recall function. However, the loop recorded is also stored even when the gadget is powered off, which helps avoid frustrating mistakes even when using the looper as a composition tool.

The solitary footswitch should handle the play/stop, undo/redo functions, but with more experience and additional functionality, you can add an external footswitch. Additionally, it features stereo inputs and outputs plus a stunning 12 minutes of record time and the ability to record the last recorded phrase in memory while your last loop is stored in the pedal even after you turn it off.

The looper is stereo-capable and fitting if you work with stereo effects pedals for deep atmospheric reverbs, modulations and delays. The RC-1 loop station is one of the best looper pedals known for its stereo signal path and for its synthesisers and keyboards. Overall, the RC-1 looper has a simple looping functionality that is easy to use while both onstage and while in your practice room.

The Boss RC-300 looper station has three synchronised tracks with exclusive rec/play/dub and Stop switches, making it one of the best looper pedal choices for professional artists globally.

It also comes with plenty of stage-ready features such as;

Compared to the RC-30 looper, the RC-300 pedal station steps this up with three loop tracks. Each track has two dedicated footswitches and each track giving you an unlimited number of overdubs, the start/stop, undo/redo, etc. It also comes with a level slider for every track allowing you to mix the loops as you'd want.

Essentially, you'd be able to build a dedicated loop for different song parts, different instruments, or even different layers, start and stop without having to interrupt the rest of the music. For instance, you could have one track for guitar parts, one for percussions, and one for guitar melodies or vocals. The artist can add to loops as they deem fit or even stop the loops as needed.

To control different parameters, the expression pedal should be assigned. The RC-300 looper is most popular used for its level control of the track, and you can fade the track in or out as you'd see fit instead of only start/stop with the footswitch. The musician can also connect two more expression pedals, so you can expand the control if you want more control over multiple parameters at a time.

At this level of looping, you’d probably want MIDI. MIDI is an easy way to synchronise multiple instruments and pedals.

The Electro-Harmonix 720 looper gets its name from the 720 seconds (12 minutes) recording time of loops that it can store across its 10 dedicated loops. Even though scrolling between these 10 loos live is definitely quite challenging, you have the option to attach an external 3-button footswitch for you to access the bank up/down and undo/redo controls.

Recommendable, it's better to control the banking by the knob, thereby freely leaving the two footswitches to act as the dedicated start and stop functions. Like TC Electronic Ditto X2 Looper, the Electro-Harmonix 720 Stereo looper also offers some effects, with half-time and reverse modes. To gradually fade out a repeating loop, it also comes with a loop fadeout mode.

Two loops might not sound much for its price; however, you can add close to 256 overdubs per loop, plus the two loops can be synchronised as well. Even then, this is not the basic synchronisation; it goes a little further than that to have these two loops play the same length of time while also making one multiple of the other.

Additionally to the parallel operation, the loop tracks can be set to series, where one starts after the other for a more streamlined transition between sections in the song.

Since the Pigtronix Infinity Looper is not quantised, you have to lay down your first loop precisely. Even then, if you're playing backing tracks, you can use MIDI to synchronise the loop with a backing track. It can even be used for two guitarists or a synth and a guitar if you're on double duty. You can do this by separating stereo inputs and outputs that are accessible through the dedicated split mode.

This looper features as one of the best looper pedals since it has useful bells and whistles as well, a reverse function, stutter modes and variable speed. If you connect an expression pedal, you can control the loop ageing with that.

What to Consider Before Buying the Best Looper Pedals

Whether you want to record simple chord progressions or create a full song on a solo performance determines what features you need.

The footswitch number plays a huge role in how easy the looper can be used and the many different things you can do.

Loop station models have a big difference in their prices and the value they bring on board. Consider how often you will use the looper, and its worth to you.

Different pedals are much easier to use in live performances than pedals. You shouldn’t need to bend every once in a while in performance just to adjust your pedals.

1. How does a loop pedal work?

Looper pedals record the audio fed to them using either a 1/4-inch instrument cable or an XLR cable. They capture the audio as a WAV file by either using an external SD card or onboard memory. They then instantly playback the recorded audio when the musician steps on one of its switches.

2. Is a loop pedal really worth it?

Dedicated guitarists should own looper pedals before owning anything else. The best looper pedals in the market come as an essential that is definitely worth getting. It lets you run backing tracks and create your loops is what makes the looper worth having. You can also record some melodies or chords, then set and play new riffs over it.