Best Electric Violin to Buy in 2022

Best Electric Violin to Buy in 2022

During the 80s and 90s, solid-state guitar amps were mainly found in beginners' bedrooms, except iconic amps like Roland Jazz Chorus and others. However, this has changed with digital modeling. The use of digital amp models has made it so convincing that it can be hard for even the most experienced and discerning ear to tell the difference between "modeled" sound and modeled thing.

The best solid-state amp tends to be easier to maintain and is more reliable. It is a great choice for musicians who are constantly on the move or if you're looking for a practice amp. They tend to be cheaper, produce clean sounds and come with built-in effects.

Finding the perfect one can seem like a challenge; that's why we reviewed the 5 best solid-state amps in the market and also outlined factors to consider when buying.

It is considered the most iconic state guitar amp due to the large list of star players that fell for it following its launch back in 1975. What makes it the best solid-state amp is its clean tone and signature. The Roland JC 120 is equipped with a 120-watt stereo amp with two 12-inch “silver cone” speakers. The guitar amp also features two input channels (Normal and Effect), each with three-band EQ and bright on/off.

The Roland JC-120 features a modulation effect that changes the pitches you play on your instrument. The guitar amplifier is versatile in that in one setting, it works a chorus effect, creating the illusion of multiple instruments all playing the same line together. While in another setting, the solid-state amplifier works as a vibrato effect, toggling your pitch back and forth with another pitch that’s close to it.

Fender Mustang GTX is one of the top-rated solid-state combo amps in the market. Features that make it the best solid amp are built-in WI-Fi connectivity, offering 200 basic and genre-specific presets over 70 effects and 40 amp models.

The combo amp claims to be the ultimate modeling amplifier. The amp modeling ranges from classic Fender clean to modern high gain tones. While the built-in effects help cover a lot of ground with 15 overdrive/distortion, 15 modulations,13 delay, 14 reverb, 7 comp/EQs, and 9 pitch shift effects.

The combo amp also features a built-in looper and a multi-switch foot pedal that unlocks Mustang GTX’s powerful onboard looping capabilities. The looper offers up to 60 seconds of record time.

Fender Mustang GTX is equipped with a Celestion speaker, thus assuring superior guitar tones. It features a crystal-clear LCD color display, making it easier to see amp and effect settings at a glance.

Lastly, the solid-state combo amp includes the Fender Tone App V. 3.0. This allows you to explore, modify, backup and restore your presets.

Katana is a traditional sword carried by the historic samurai of Japan and is considered a symbol of honor, precision, and artistry in Japanese culture. The amplifiers in the Katana series are designed to model the same traits. They are designed to be smooth, with cutting tones honed by generations of dedication and expertise.

This is the best solid-state amp if you're a beginner to intermediate guitarist. The Boss Katana 50 features five amp characters: Clean, Crunch, Lead, Brown (derived from the Waza amp), and Acoustic (for acoustic-electric guitars)

One of the combo amplifier's best features is the ability to store favorite amp channel and effects setups in Tone Setting memories for instant recall. You can add a second bank of Tone Settings, doubling the number of available memories from two to four with the Version 2 update.

The combo amp is combined with the newly added channel and global parametric EQs (configurable in BOSS Tone Studio). This elevates the Boss Katana 50 performance versatility to even higher levels. It's also easy to select Tone Settings and switch between the two banks from a panel button or via an optional external footswitch for hands-free control on the gig.

You have access to 58 customizable effects and effect routing configurations with the BOSS Tone Studio editor software. You can also load your favorites into the amp’s various effects sections. The Katana-50 also features USB and phones/recording outputs with cabinet simulation, allowing you to send mic’d up amp tones to a computer DAW, recorder, or headphones for quiet practice. 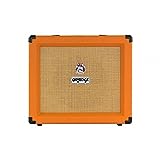 The Orange Crush 35-watt amp is equipped with 2 channels, 3 band EQ, and a speaker.

a) Power Rating and Volume

When searching for the best solid-state amp, you're looking for one with the right power rating. The key is finding the power rating right for you as you don't want a loud practice amp or a quiet stage one. What's great is that you can get amps with built-in power attenuation nowadays, which allows you to achieve bedroom-level sound with big and loud amps while still getting good cranked tones.

If looking for the best solid-state amps for playing gigs in medium to large venues/stages, you'll want to ensure you at least have a power rating of 100 watts. This will ensure you have plenty of range during your gig; thus, your solid-state amp won't be pushed to the breaking point.

Since solid-state amplifiers tend to be more affordable, they have racked up a reputation of having bad sound quality. However, considering many musicians use them, the sound can't be that bad.

With solid-state amplifiers, you can expect clean tones. It also has a quicker response compared to a tube amp. However, tube amps have the advantage of having a higher representation of overtones and a more organic sound.

If you're a pedalboard user, you're likely already to have an array of overdrive and distortion pedals. Hence, all you're looking for is a clean platform to amplify and complement those tones. Tube amps tend to handle distortion better compared to solid-state amps. Hence, depending on the type of player you, it's important to keep in mind the number of channels an amp possesses, especially if you're looking to switch from clean to distortion easily.

The speaker size is a metric you can use to get an idea of the response an amp will have in different frequency ranges. A smaller speaker (6-10”) is likely to have a clearer voice that emphasizes treble frequencies, while a larger speaker (15”) will be more bass-heavy.

Most amps fall in the middle at 12” because a 12” speaker is generally considered to have a pleasing response across the board.

If looking for an amp with many built-in effects, the best choice would be to go with a modeling amplifier. Alternatively, you can settle on a reverb. Most solid-state amps don’t have the best built-in distortion/overdrive circuits. The only exception is high-end solid-state amplifiers.

However, most solid-state amps do come with distortion. The distortion will not be perfect, but it is often enough until you get a distortion or overdrive pedal.

Modeling amps are not really necessary for every musician, but their main appeal lies in their versatility.

Leading brands continue to innovate by creating digital and android compatible models which are readily available. They provide the opportunity to evolve as an artist as well as enhancing your music production quality.

The amps also promote connectivity, with some offering apps with access to communities where you can share ideas and discuss effect features in-depth. These are ideal for those interested in exploring how to infuse technology into their artistry.

Some questions to consider when thinking about a digital amp: Do you want it to mimic the look and feel of a vintage valve amp, with just a simple array of controls to navigate? Or would you prefer to navigate menu after menu on an LCD screen, or fire up an app for deep editing via Bluetooth?

Guitar amps can either be a head or combo. Combo amps combine the pre-amp, power amp, and speakers in a single unit. In contrast, the head requires external speakers to use. The advantage of an amp head is that you're able to run more speakers if necessary.

What is the difference between solid-state amps and tube amps?

The key difference between the two is that solid-state amplifiers derive amplification from electronic transistors, while a tube amp uses vacuum tubes (also known as valves). Transistors operate differently from tubes in that they don’t pleasantly distort when pushed to their limit. In comparison, players that prefer a tube amp do because they believe it sounds its very best when pushed to the max.

Other differences include that solid-state guitar amps are best suited for players looking for maximum range. ( aka loud, clean, and undistorted signal). However, without a bit of natural distortion, an electric guitar can sound brittle. Hence they tend to be more popular with bassists and keyboard players than with guitarists.

Solid-state amps tend to be lighter than tube amps; hence many musicians especially gigging ones, tend to value their convenience. While in terms of tone, jazz players often favor solid-state amps as they usually play with no overdrive.