Strings on a violin

The violin was first known in the 16th century in Italy. It is often called a fiddle when used in Classical music scenes or in a folk music context. Although the earliest stringed instruments at that time were mostly plucked, versions of this bowed string instrument came out from all over the world. In the East, the Erhu from China and the Morin Khur, which evolved from the rabab, are relatives of the violin.

Earliest pictures of violins, with three strings then, are seen in Northern Italy around 1530, while explicit descriptions of the instruments, including its tuning, was published in 1556 yet. Just about the same time when the violin has already begun to spread throughout Europe.

Compared to its’s ancestors, the violin is a class by itself. The different versions of the instrument did not develop gradually over time but appeared in its current form suddenly around 1550. Violins produced by the earliest violin makers recorded in history, Andre Amati and Gasparo di Bertolotti, still exist today.

Getting to Know the Violin

The violin has 9 important parts. All of which play a significant role in the quality of sound that the instrument produces.

The bow is the tensioned stick with hair affixed to it that when moved across some part of a musical instrument, causes vibration, and emits sound.

The largest part of the violin is the hollow body shaped like an hourglass. Its main function is to amplify the sound of the strings.

Here is a long piece of wood that sticks out from the body, called the neck. It is where the fingerboard is glued. This is where the musician presses down on the strings. Right above the neck is the pegbox, where the adjustment of the strings happens.

There are two holes found in the body of the violin-shaped like italicized Fs. These are called the f-holes, where the sound of the instrument comes out. Changes in the size, shape, and length of these holes can change the sound produced by the violin.

A piece of wood is found in the body of the violin where the strings lay on top of, called the bridge. Passing over the bridge, the ends of the strings connect to the tailpiece.

At the bottom of the body is a chin rest, which helps the musician support the violin while playing.

Probably the most important part of the violin is its strings. Violin strings were first made of catgut (sheep intestine), which was stretched, dried and twisted. But through the years, innovations have been made in terms of materials used. Modern-day strings may be gut, solid steel, stranded steel or various synthetic materials such as nylon wound with various metals, and sometimes plated with silver.

There are four strings in a violin. From high to low pitch, the strings on the violin are E, A, D and G.

The highest pitch of the instrument is produced by the E string. Naturally, it is the thinnest string of all. It is located on the right side of the violin (for right-handed players). When holding up to your shoulder, the E string is the farthest from your head.

Only the E string has an adjuster so that it can be easily tuned, while the others rely on tuning pegs for tuning. Recently, however, with the developments and advancement in technology, some violins come with four adjusters already for any musician’s convenience.

The E string on the violin is always tuned last. Simply because there’s a fine tuner for it, and it’s a steel string.

The A string is the second thinnest string located right beside the E string. The A string is always first to be tuned to a standard pitch (440 Hz). When accompanying or playing with another instrument, the violin tunes to it.

This is the second thickest string of a violin and is one of the inside strings found between the A and the G strings. The D string is the perfect partner of the A string when tuning the instrument.

The lowest pitched string in a violin is the G string, the thickest of the four. Musicians usually worry about this string when tuning, as it is used a lot sometimes. It is removed so slightly from A that it’s very easy to get wrong. The string has also the tendency to stretch and the pitch falls slightly in the course of a long piece.

While violins mostly have four strings, there are versions of the instrument with five or more, as many as seven strings. The seven-stringed violin is very rare and are typically used in jazz or folk music. The extra strings on these models are typically lower in pitch than the G, usually tuned to C, F and B flat. Some custom-made instruments have extra strings which are not bowed, but which sound sympathetically from the vibrations produced by the bowed strings.

Strings also have a limited lifetime. The mass of the string can become uneven along its length due to several factors like oil, dirt, corrosion, and rosin that may accumulate. There are also instances such as winding of the string and coming undone while playing that may cause the string to break. Sometimes, the strings stretch too far enough, lose the desired tone, brilliance and intonation that musicians want to replace them already.

To commit to memory the violin strings in order to increase your progress in learning to play the violin is non-debatable. When a musician is able to memorize the strings and it becomes part of the unconscious mind can emotions and feelings take over? Only then can we say that the musician and his instrument becomes one.

What notes are the 4 strings on a violin?

What kind of violin has 5 strings?

Different brands offer this Violin. The major thing you should note is that for a 5th String you are able to play other parts e.g., those for Viola’s and even Cellos in some instances.

What are the open strings on a violin?

What strings do famous violinists use?

It bottles down to personal preference. Actually, some prefer different strings for different notes. 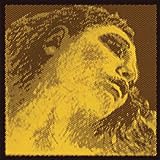 Is a violin a fiddle?

The Violin, Viola and Fiddle are all bowed string instruments that belong to the same family. In reality, many people believe there is no difference between these musical instruments, particularly when it comes to the fiddle and the violin.

What Rosin do famous violinists use?

Rosins jet down to personal preferences like a majority of other instrument accessories. There is definitely not one you could say all the Pros use across the board. It all comes down to tastes as well as the sound that the feel is gotten from the bow when using a particular rosin, they use.